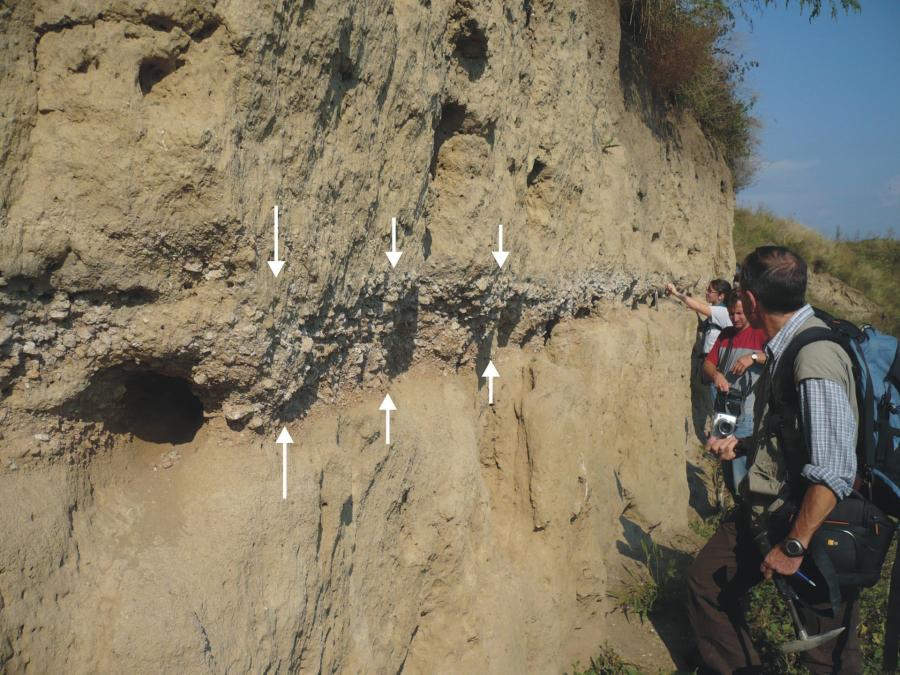 The latest study of the MTA-ELTE Volcanology Research Group was published in the leading journal of the field, the Journal of Volcanology and Geothermal Research.

Each person has a unique fingerprint that we can use to unlock a smartphone, possibly to help find a culprit. But what does this mean for a volcano? Basically the same thing: you can help find a volcano or an eruption of it!

During large-scale explosive volcanic eruptions, significant amounts of fragmented volcanic material are released into the air: rock debris, tiny crystals, shards of rock, and gases. Larger pieces of rock strike the surface near the volcano, but particles smaller than a millimeter (volcanic ash) rise high with the gases, where they are swept away by the prevailing winds for distances of up to hundreds or more thousands of kilometers. Eventually, they also fall to the surface and form a thin volcanic mantle (tefa layer) on the surface. If buried quickly, they can be preserved and thus remain a witness to a unique event.

Tefra strata, or just individual volcanic ash particles, have significant importance. Because if they can be linked to a volcanic eruption at a known time, they are an important guide: when the sedimentary series is deposited, if there are signs of the environment, then, based on age, we can deduce climate and environmental change events, their temporality, in some cases the age of archaeological finds can be given, and the succession and temporal frequency of large eruptions of a volcano can be revealed.

The key, however, is how to locate a teffra layer at a great distance from the volcano. There are often many candidates for this, as there can be as many as dozens of volcanoes in the environment as potential sources, such as in the Mediterranean. This is real detective work at its best! And if it's detective work, it needs clues, and fingerprints! Szabolcs Harangi, the head of the Volcanology Research Group of the Hungarian Academy of Sciences and Eötvös Loránd University, a professor and staff of the Department of Petrology and Geochemistry of Eötvös Loránd University, has been studying the youngest volcano in the Carpathian Basin, Ciomadul. A recent study by the research team reveals fingerprints of the volcano’s teffra sediments.

“The identification of the tefra layers, their connection to volcanoes and volcanic eruptions is usually done by specialists on the basis of the chemical composition of the main element of the rock shards. There have been countless large-scale volcanic eruptions in the Mediterranean over the past hundred thousand years. Some of these formations can indeed be well separated based on the chemical composition of the main element, but in many cases the data overlap. For example, there is no difference between the chemical composition of many Turkish, Greek volcanoes and the volcanic ash material that surfaced during the eruptions of Ciomadul, ”introduces Szabolcs Harangi to the difficulties of the tefrac correlation. “That’s why we started a more detailed interrogation: based on the analysis of a few tens of microns of zircon crystals, we calculated the time of Ciomadul’s large explosive eruptions, i.e. teffra deposition, characterized the appearance of volcanic ash particles, their crystals trace element composition. These are the fingerprints of the volcano and a volcanic eruption, which can be used to connect a distant layer of teffra to the eruption of Ciomadul. ”

Harangi et al., based on the fingerprints of the teffra layers, pointed out that the material of the Ciomadul eruptions can be reliably separated from the formations of volcanic eruptions of a similar age. All this is an important result in the identification of the teff layers found in the Mediterranean environment and in the related scientific work on climate and environmental change. Furthermore, the results of a recent study also point out that the last volcanic eruptions in Ciomadul were 30,000 years ago, during which there were repeated significant explosive eruptions, and their volcanic ash material could reach remote areas.